Oman real estate market is expected to see recovery form the recent decline form year 2018 onwards. This is based on anticipated Oman GDP by 5.2%; the strongest rate of expansion since 2015. Oman’s economy is still working its way through a challenging period, triggered by the shock collapse in oil prices in 2014. As the country continues to embark on a challenging roadmap to wean itself off its dependence on oil revenues through diversification efforts and positive government intervention, the real estate market has been impacted by a reduction in overall demand.

There remain, however, some pockets of activity and clear opportunities for landlords in both the residential and commercial sectors. Oxford Economics is forecasting that GDP growth will fall to a nominal 0.4% this year, from 1.5% last year as government spending continues to ease, underpinning the slowdown currently being experienced. 2018 is, however, expected to be a stronger year, with GDP growth expected to surge by 5.2%; the strongest rate of expansion since 2015.

The rapid acceleration of economic growth is forecast to be fuelled to a significant degree by the introduction of natural gas production from the Khazzan gas field. In addition, stronger non-oil sector growth is projected as a result of an anticipated easing of fiscal pressures due to a turnaround in oil prices from about USD 45 per barrel at this time last year to around USD 55 per barrel in October 2017. A freeze on public sector recruitment is also forecast to aid the reduction in the budget deficit to 10.9% of GDP this year, from 21.1% of GDP in 2016.

New airport to deliver economic boost In addition, the opening of the new airport in Muscat later this year is expected to deliver a significant boost to the city’s tourism and hospitality sector, while also opening up new development opportunities for land parcels around the airport.

Operational Readiness and Airport Transfer (ORAT) trials have recently been carried out at the new Muscat International Airport terminal which is now expected to be operational by the end of 2017. The opening of the new airport building will significantly improve passenger handling capability and should provide a significant boost to the Sultanate’s efforts to grow its tourism sector by improving international access to and from Oman. International passenger numbers passing through the airport more than doubled from 2010 to 2016, highlighting the growing potential of tourism.

The new road network associated with the airport and junction improvements to existing roads have significantly improved access to the Airport Heights area which will help to drive the locality’s potential development as a new commercial hub for Muscat. 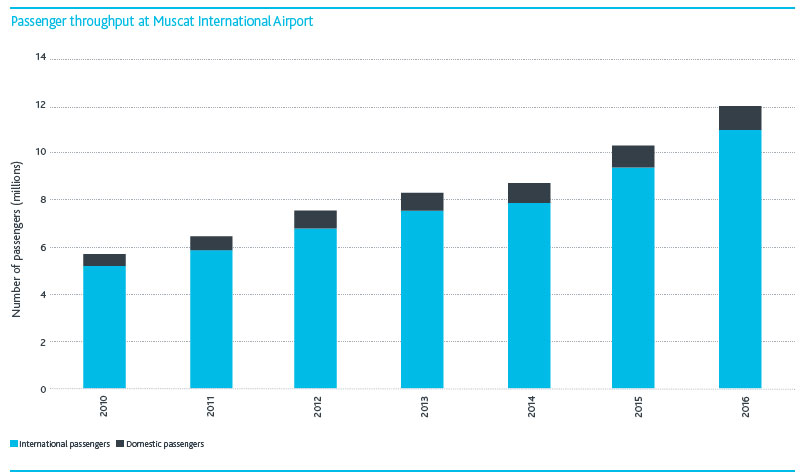 While we wait for evidence of sustained economic growth, demand for residential rental accommodation in Muscat remains muted. Anecdotal evidence of job losses and housing allowance reductions continues, albeit perhaps to a slightly lesser extent than this time last year. Bearing the brunt of cost cutting programmes remains the public sector, where positive government intervention and cost management has seen a trimming in the public sector work force, while the construction sector has been impacted by a reduction in state spending levels. This has translated in to a contraction in the number of those employed by the sector. The last 12 months have seen relative stability bedding in across virtually all of the 12 main residential submarkets in the Omani capital which we monitor. That said, our analysis shows that the premium residential locations across the city have seen the largest drops in achievable rental values over the last year as tenant demand has increasingly focussed on more affordable locations and properties.

Overall, in the 12 months to the end of September average residential rents receded by a marginal 0.8%; and by just 0.2% in Q3. The latest change leaves average rents at about OMR 690 per month, down OMR 5 per month on Q3 2016.

As always, the average figure for the market as a whole does conceal a more complex picture. Average rents in premium residential areas such as Muscat Hills, Al Mouj and Madinat As Sultan Qaboos have dropped by around 10% in comparison to the same time Hadidlast year reflecting a dampening of demand for more expensive properties. Other locations have generally seen drops of around 5% in comparison to this time last year, but both Ruwi and Sur Al Hadid, which are both relatively low value locations, have registered no change in rents over the last 12 months.

Average rents in Muscat are now generally 20% to 25% lower than they were during Q3 2014, right before oil prices plunged from highs of close to USD 110 per barrel, highlighting how intrinsically intertwined Oman’s economy and property markets are with the performance of oil prices. Tenant’s market

The rental market undoubtedly remains firmly in the favour of tenants. Weaker demand has resulted in the reduction or eradication of waiting lists for key residential buildings in the city.

Buildings such as Hatat Complex and Al Assalah Towers are highly sought after buildings in Muscat due to the quality of accommodation they offer, combined with their perceived value for money, facilities and highly rated property management services. Here too however, we have seen waiting lists erode over the last 12 months. Both schemes do, however, continue to attract high levels of interest and remain very well let, with both buildings reporting occupancy levels near 100%. Elsewhere, tenants continue to be drawn to well managed buildings, particularly those that offer what is perceived to be better quality accommodation and facilities at competitive prices. It is these buildings that have been able to ride out the current market weakness and continue operating at strong occupancy levels with minimal rental value reductions 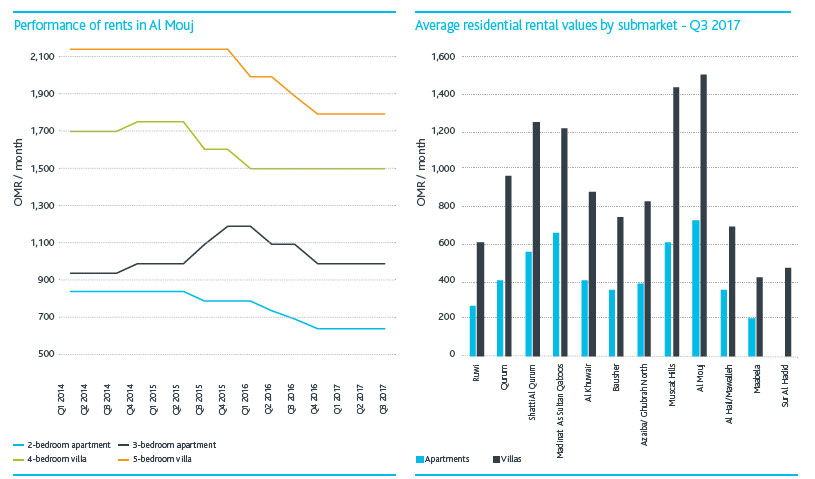 Elsewhere in Muscat’s property market, office rents have seen limited declines through 2017. Over the course of the last 12 months, the CBD has been the city’s weakest performer, with rents dipping by 14.3%, followed by Al Khuwair (-9.1%). Qurum, Ghubrah and Azaiba all followed in third place, with average declines of 750 baisa, or 8.3%, to OMR 5 psm over the same period.

Despite the declines in office rents across the board, occupiers appear nervous to commit to relocating, often deterred by the expenses associated with a move, including fit out costs. Furthermore, we expected greater flexibility from landlords due to the stagnant market conditions, however this has failed to materialise en masse, with many landlords not being proactive and responsive to the weak market conditions.

In contrast, absorption has been reasonably strong for recently completed, higher quality developments where landlords have taken a more proactive approach to attracting tenants, particularly in terms of offering competitive rental values

Industrial sector boost likely with Duqm development The development of Duqm as an industrial port city of potentially international significance continues to gather pace. The port is already operational with Phase 1 expected to be fully completed in 2019. Furthermore, the 230,000 barrel per day oil refinery (a joint venture between Oman Oil and Kuwait Petroleum) and the crude oil storage facility at Ras Al Markaz are projected to become operational at the end of 2020.

There is also reported to have been strong private sector interest in investing in the proposed OMR 1 billion, 350 km freight railway line to transport limestone from Al Shuwaymiyah and gypsum from Manji (both in Dhofar) to the Port of Duqm. In addition, the South Korean government has recently announced plans to assist with developing Duqm into a “smart city”.

Ten sub-usufruct agreements have now been signed between Oman Wanfang and Chinese companies for projects worth a total of USD 3.2 billion within the 11.7 square kilometre China-Oman Industrial Park.

Overall, while industrial warehouse rents have held stable across Muscat so far this year, Duqm may well spark further activity across the country should the Chinese investments in the area drive up interest from international logistics and manufacturing occupiers looking to position themselves on the emerging Silk Route resulting from the Chinese government’s Belt & Road development strategy.

The property market in Oman has been through a very challenging period over the last three years. The collapse in oil prices has been the key catalyst for the sharp slowdown experienced across virtually all sectors as it remains the backbone of economic growth as hydrocarbon revenues still constitute the principal source of income for the Sultanate. Aside from the clear risks to overall demand levels for both residential and commercial property that stem from any further weakness in oil prices, there are a few downside risks that we are monitoring:

Value Added Tax (VAT): While Saudi Arabia and the UAE have forged ahead with plans for VAT, commencing 1 January 2018, Oman is yet to declare its intentions on the formal roll out of a VAT regime. The implications of VAT in Oman are likely to be a spike in inflation, which may dent consumer confidence and spending. This would of course come in addition to the gradual erosion of state food and energy subsidies, placing household finances under further strain.

The impact on the property market is still unclear, but if the Sultanate follows in the footsteps of the UAE by taxing all commercial sales and lease transactions, demand is likely to weaken further, driving down rents from their current record low levels.

While the UAE has left residential leases and sales transactions exempt, developers will be able to reclaim VAT on the cost of construction materials, should they sell their developments within three years of completion. This suggests that the market in the UAE will see better due diligence done before new schemes are launched and a similar approach may see developers in Oman trying to better match proposed supply with demand.

Should Oman follow the Saudi Arabian authorities’ decision to tax buy-to-let residential property, we may see a sudden weakening in the buoyant second homes market.

Qatari diplomatic crisis: While we are not too concerned about the direct impact this will have on Oman’s property markets, we remain cautious about the potential disruption to regional capital flows and a possible weakening in international investor sentiment when looking at the region as a whole. For now, Oman’s ports and airports are clearly beneficiaries of the situation as they emerge as the defacto passenger and cargo gateways to Qatar. Should the UAE, Bahrain and Saudi Arabia restore diplomatic relations with Qatar, this economic boost would clearly soon fade.

Foreign Investment Law: Proposed changes to the Foreign Capital Investment Law are regaining momentum as the Sultanate looks to introduce a comprehensive regulatory framework to attract foreign direct investment. The new regulations, which have been prepared in cooperation with the World Bank, are reported to be nearing completion and we understand that they are likely to allow full foreign ownership of companies in various sectors and remove the minimum capital requirement for setting up a company.

The easing of current regulations should provide a boost to the inflow of foreign investment by significantly reducing existing hurdles to entering the Oman market.

With these potential factors in mind, our central view is that the residential rental market in Muscat is likely to remain relatively stable for the remainder of 2017 with rents, on average, likely to end the year only marginally down on 2016.

We expect rents to stabilise over 2018 with the potential for only limited further downward corrections. However, we do not see any realistic prospect of rental value increases until at least 2019.

For the office market, downward corrections of up to 25% in markets like the CBD over the last three years, triggered by the oil price fall, have driven rents to all time lows in many locations. Our view for 2017 is for relative stability with the potential for limited further reductions.

2018 may well see further falls in headline asking rates should VAT be imposed on the commercial office market, as is the case elsewhere in the GCC. We would currently foresee upward momentum returning to the office market in 2019 at the earliest.